Today (in the EF) is the feast of St. Hilarion, a saint perhaps better known in the Eastern Church than then West, but pehaps quite a relevant figure to pray to for some of today's needs, given his associations with the currently-troubled areas of the Middle-East. 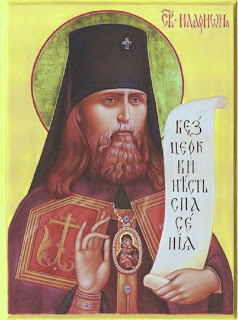 "Like St Anthony [the Abbot] in Egypt, St. Hilarion was the founder and organiser of monastic life in Palestine and the spiritual father of many monks. St. Jerome, who encountered Hilarion during his sojourn in Palestine wrote his life. He was born in the south of Gaza in Palestine and studied in Alexandria; in Egypt he came to know St. Anthony, desired to share his solitary life with him, and introduced this form of life to his own country where it spread rapidly. Driven from Palestine by the persecutions of Julian the Apostate, Hilarion went to Sicily and Dalmatia, finally finding refuge in Cyprus wher he died in 371 at the age of eighty."

So perhaps it might be appropriate to invoke his aid for those who are refugees in the Middle-East, especially those driven from Syria, and also entrust to his care the souls of those who died recently, attempting to cross the Mediterranean from North Africa.

St. Jerome also relates that Hilarion had much spiritual warfare against temptation:


"So many were his temptations and so various the snares of demons night and day, that if I wished to relate them, a volume would not suffice. How often when he lay down did naked women appear to him, how often sumptuous feasts when he was hungry!" (Jerome, Life of St Hilarion, 7)

It is comforting to know that when we experience temptaions, there are saints who have been through it before us and 'made good', and who will be with us and support us when we call on them.