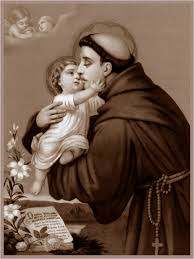 A recent post by Mac of Mulier Fortis concerning finding a lost ring has started a thread of comments about my old friend, St. Anthony of Padua.

This, coupled with having just heard on the News a trailer for a documentary about loneliness and depression put me in mind of St. Anthony's Brief, about which I have posted in the past, but is worth recalling.

The Brief originates from the Story of a 13th. Century Portugese woman who, through depression or demonic influences, was driven to the point of planning suicide by drowning herself in the River Tagus. As she approached the river, she passed a wayside shrine to St. Anthony and there experienced a vision or dream of the Saint, in which he gave her a parchment, saying, "'Arise woman, and take this paper, which will free you from the molestations of the Evil One". The parchment was a real, physical object and contained the words shown below:

The woman recovered, and her story spread to the extent that the King heard of it and asked for the Brief, which she gave to him, and which was added to the Crown Jewels of Portugal. Unfortunately, when she no longer had the brief about her person, the woman's mood again fell and old thoughts again troubled her. The King responded by having a copy of the Brief made for her, which was efficacious once she received it.

To this day, copies of the Brief are available, either printed on paper or linen, or in the form of medals, and are recommended for use by those who are troubled in mind.

In an era when mental illness, self-harm and suicide are prevalent, especially among the young, it would be good to invoke St. Anthony and encourage devotion to him and the use of his Brief.