Following my post yesterday for the Feast of St. Agnes, a few more thoughts.

First, I have just read a very good post by Fr. Ray Blake on St. Agnes. Terrifyingly, he suggests that, having seen her relics and the size of her skull, she may, in fact, have been somewhat younger that the 13 years that my source stated. A small child, the victim of an attempted forced marriage, subsequently forced into a brothel, and finally murdered because she resisted attempts of sexual violence against her, because of, and strengthened by, her love for Our Blessed Lord. Sadly, despite the intervening centuries, children are still being subjected to all these horrors in various times and places (perhaps the most shocking and scandalous occasions are when the abuser has been one of our own Catholic Clergy or Religious). Let us continue to pray to St. Agnes, and the other Saints, especially the Virgin Martyrs, for child victims, for an end to abuse, and for healing of the scandals it has caused.


And now, I will return to some lighter topics of interest about St. Agnes.

Agnes is usually depicted, accompanied by a lamb. This is obviously a play on words around her name, the Latin for lamb being, of course, agnus. In fact her name apparently derives from a Greek word meaning 'chaste' or 'pure'. The lamb is, however, very fitting as it suggests youth and innocence (qualities we know Agnes possessed); it's white fleece perhaps a symbol of purity. Then there is a second symbolism - her devotion to Jesus, the Lamb of God.

The link between St. Agnes and the lamb is also associated with the pallium, a vestment worn by the Pope, Primates and Metropolitan Archbishops when celebrating Mass. For those unfamiliar with this garment, here is a picture of St. John Paul, wearing one - it is the Y-shaped thing around his neck, pinned to the chasuble.

The wool used in making pallia (I think that's the correct plural) is shorn from two lambs which are raised by Trappists, and presented anually on St. Agnes' Day to the Chapter of the Lateran Basilica by the Canons Regular of the Lateran. These are solemnly blessed during a Papal Mass.

Some readers may recall that when Pope Benedict was first elected, he wore an earlier form of the pallium, resembling the stole of Deacon in the Eastern Rite (see the picture below). It is this pallium which he laid on the tomb of St Celestine, a gesture we now know symbolised his intention to resign his pontificate.

For those interested, here is a diagram showing how the pallium developed from this early form to the modern one (something that might be a call for reviving the Rad Trad's Liturgical Boutique ;-))

Posted by Matthaeus at 22:02 No comments:

As I have said before, I have a great deal of time and admiration for the virgin martyr Saints of the Church, and today is the Feast of yet another: St. Agnes. 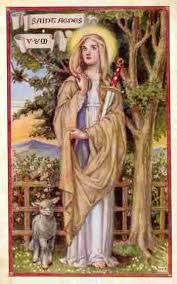 The following account of her life and martyrdom is taken from Catholic Online:-

"St. Agnes was a Roman girl who was only thirteen years old when she suffered martyrdom for her Faith. Agnes had made a promise, a promise to God never to stain her purity. Her love for the Lord was very great and she hated sin even more than death! Since she was very beautiful, many young men wished to marry Agnes, but she would always say, "Jesus Christ is my only Spouse."
Procop, the Governor's son, became very angry when she refused him. He had tried to win her for his wife with rich gifts and promises, but the beautiful young girl kept saying, "I am already promised to the Lord of the Universe. He is more splendid than the sun and the stars, and He has said He will never leave me!" In great anger, Procop accused her of being a Christian and brought her to his father, the Governor. The Governor promised Agnes wonderful gifts if she would only deny God, but Agnes refused. He tried to change her mind by putting her in chains, but her lovely face shone with joy. Next he sent her to a place of sin, but an Angel protected her. At last, she was condemned to death. Even the pagans cried to see such a young and beautiful girl going to death. Yet, Agnes was as happy as a bride on her wedding day. She did not pay attention to those who begged her to save herself. "I would offend my Spouse," she said, "if I were to try to please you. He chose me first and He shall have me!" Then she prayed and bowed her head for the death-stroke of the sword.

When one reads the tales concerning the sexual exploitation of young girls, that the popular press seem to ever-more-frequently publish, thoughts must turn to the example of Saints like Agnes, herself only a teenager, who preferred death for Our Lord's sake to a perhaps easier option of succumbing to the gifts and promises of a seducer. Let us pray that she might be able to guide and inspire any youngsters who, today, are facing coercion to yield their virtues for the sake of some transitory presents, and as an Angel protected Agnes, may their Guardian Angels come to their aid.

I was interested to hear of the Holy Father's recent comments on so-called 'freedom of speech', and his intimation that hearing someone or something you love and care about insulted does provoke a certain desire to thump the perpetrator. While most of us are unlikely to act out such thoughts, I am sure that most of us from time to time feel like landing a well-aimed punch at some obnoxious character who is being deliberately offensive for effect.

At the same time, I would suggest that very few of us would immediately think of committing multiple murders in these circumstances.

The key point is' how far is acceptable?'

It is not acceptable to deliberately insult and be offensive about a person's religion, even if you believe it to be a false one (I see the Bones has written a good piece on this). After all, at least here in the UK, were you to be similarly offensive about someone's race, sexuality, disability, etc., you would be very likely to find yourself in court). Kudos to the Holy Father for speaking out on this!

Of course, equally, there is also no way in which excessive reactions to insults can be justified. No way is it acceptable, for example, to murder someone because they specialise in publishing cartoons which aim to offend any and every group they can (as this post by Fr. Blake and this one by the Bones show).

It seems we now live in an age of sometimes inconsistent extremes, where to even breathe a word on certain subjects is seen as a sort of secular anathema, while to show righteous indignation is 'restricting freedom of speech'; where some are too scared to react to anything while others go way beyond extreme, and commit atrocities.

I am put in mind of the final lines of  this old song by the Dubliners, from an era when Ireland was rather less settled than today, and which tells of some of the earthier aspects of Irish life: the line goes like this -

'We used to solve our differences by a digging match and a jar,

Perhaps it was easier when you could settle a score by inviting him outside for a bout of fisticuffs, and then, crucially, when the matter is settled, having a drink with him to show there was no lasting grudge. I don't know. I do wonder if, during the short period in his earlier life when he worked as a club 'bouncer', the Holy Father ever saw disagreements settled like this.﻿
Posted by Matthaeus at 11:11 1 comment:

I see that Zephyrinus has put up an interesting post concerning regional accents, something which I, too, find fascinating.

Not to be outdone, here is my few pennyworth, not just accents but dialects as well. First, a piece from Wiltshire, concerning the possible(?) origins of the prehistoric barrow known as Silbury Hill, as well as an amusing account of getting 'one up' on the devil (always a good idea). The singer is one Fred Wedlock, whom those old enough to recall the '80's might remember had a one hit wonder with a song called 'The Oldest Swinger in Town'.


Then there's this in Geordie.
And finally, this Bristolian piece, by the late Adge Cutler, founder of the 'Scrumpy and Western' group  'The Wurzels' (the group enjoyed a brief period of fame in the late '70's / early '80's, with songs such as 'Combine Harvester' and 'I am the Cider Drinker', but sadly, without Adge, who died tragically in a road accident, just before they hit the big time).
﻿
﻿
﻿
Posted by Matthaeus at 19:26 1 comment: