The Feast Day of another of my personal Patron Saints... 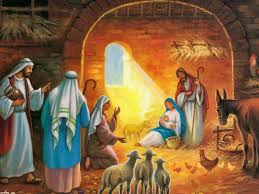 May the joy, peace and blessings of Christmas be with you all.
Adeste Fideles
﻿
Posted by Matthaeus at 01:37 1 comment:

Couldn't let her feast go by without posting something. She is another of the great Virgin Martyrs of the Church, for whom, regular readers will have probably gathered, I have a particular respect and reverence.

I found this rather charming piece on  American Catholic, as part of their 'Saint of the Day' series, and have reproduced it below.

"Every little girl named Lucy must bite her tongue in disappointment when she first tries to find out what there is to know about her patron saint. The older books will have a lengthy paragraph detailing a small number of traditions. Newer books will have a lengthy paragraph showing that there is little basis in history for these traditions. The single fact survives that a disappointed suitor accused Lucy of being a Christian and she was executed in Syracuse (Sicily) in the year 304. But it is also true that her name is mentioned in the First Eucharistic Prayer, geographical places are named after her, a popular song has her name as its title and down through the centuries many thousands of little girls have been proud of the name Lucy.
One can easily imagine what a young Christian woman had to contend with in pagan Sicily in the year 300. If you have trouble imagining, just glance at today’s pleasure-at-all-costs world and the barriers it presents against leading a good Christian life.
Her friends must have wondered aloud about this hero of Lucy’s, an obscure itinerant preacher in a far-off captive nation that had been destroyed more than 200 years before. Once a carpenter, he had been crucified by the Roman soldiers after his own people turned him over to the Roman authorities. Lucy believed with her whole soul that this man had risen from the dead. Heaven had put a stamp on all he said and did. To give witness to her faith she had made a vow of virginity.
What a hubbub this caused among her pagan friends! The kindlier ones just thought her a little strange. To be pure before marriage was an ancient Roman ideal, rarely found but not to be condemned. To exclude marriage altogether, however, was too much. She must have something sinister to hide, the tongues wagged.
Lucy knew of the heroism of earlier virgin martyrs. She remained faithful to their example and to the example of the carpenter, whom she knew to be the Son of God. She is the patroness of eyesight.

If you are a little girl named Lucy, you need not bite your tongue in disappointment. Your patron is a genuine, authentic heroine, first class, an abiding inspiration for you and for all Christians. The moral courage of the young Sicilian martyr shines forth as a guiding light, just as bright for today’s youth as it was in A.D. 304.


Quote:
“The Gospel tells us of all that Jesus suffered, of the insults that fell upon him. But, from Bethlehem to Calvary, the brilliance that radiates from his divine purity spread more and more and won over the crowds. So great was the austerity and the enchantment of his conduct.” “So may it be with you, beloved daughters. Blessed be the discretion, the mortifications and the renouncements with which you seek to render this virtue more brilliant.... May your conduct prove to all that chastity is not only a possible virtue but a social virtue, which must be strongly defended through prayer, vigilance and the mortification of the senses” (St. John XXIII, Letter to Women Religious).

Posted by Matthaeus at 09:54 No comments:

﻿
As I believe I have said before, I have a lot of time for the canonised virgin martyrs of the Church. I didn't know a lot about today's Saint, Bibiana, so have looked her up on Catholic Online (the text of the entry is as follows):

St. Bibiana, Virgin and Martyr (Feast day - December 2nd) Other than the name, nothing is known for certain about this saint. However, we have the following account from a later tradition.
In the year 363, Julian the Apostate made Apronianus Governor of Rome. St. Bibiana suffered in the persecution started by him. She was the daughter of Christians, Flavian, a Roman knight, and Dafrosa, his wife. Flavian was tortured and sent into exile, where he died of his wounds. Dafrosa was beheaded, and their two daughters, Bibiana and Demetria, were stripped of their possessions and left to suffer poverty. However, they remained in their house, spending their time in fasting and prayer.
Apronianus, seeing that hunger and want had no effect upon them, summoned them. Demetria, after confessing her Faith, fell dead at the feet of the tyrant. St. Bibiana was reserved for greater sufferings. She was placed in the hands of a wicked woman called Rufina, who in vain endeavored to seduce her. She used blows as well as persuasion, but the Christian virgin remained faithful.
Enraged at the constancy of this saintly virgin, Apronianus ordered her to be tied to a pillar and beaten with scourges, laden with lead plummets, until she expired. The saint endured the torments with joy, and died under the blows inflicted by the hands of the executioner.