Commemoration of SS. Ursula and Companions, Virgins and Martyrs 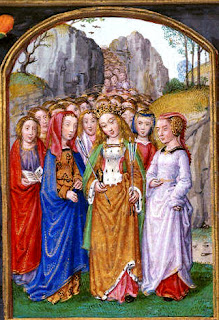 In the EF today, the feast of St. Ursula and her companions is also commemorated. The following notes are taken from the St. Andrew Daily Missal (1962 Edition).


"To-day's feast celebrates a group of virgins martyred at Cologne at the end of the third or the beginning of the fourth century. - The legend of St. Ursula's 11.000 companions, killed at Cologne by the Huns, was very popular in the Middle Ages. Probably an inscription: "undecim M. Virg."  meaning: "undecim Martyres Virgines", was interpreted as "undecim Milia Virgines".